A friend reminded me the other day that I should post something about how I was interviewed for public television last year. [In the U.S., we have regular commercial television, but also "public television" that is supported in part by direct contributions by viewers.]

Unfortunately, I wasn't interviewed about FreeDOS. Instead, I was asked to be a guest expert on technology. Specifically, the show topic was "When Technology Fails" and discussed what happens when IT doesn't work the way it's supposed to, and how you can prepare yourself with backups and such.

So, if you've ever wanted to see me in person, go watch the episode. I was the second of 2 guests, so I appear at about 15 minutes into the show.

This year, I had a great idea for a Christmas gift to give one of my friends. It was an idea so awesome, so massive, so merciless, that it required the help of many other friends to make it happen.

One of my friends is Kelly McCullough, who you may know as the author of the WebMage series. He has 4 books out now, with a 5th on the way. Kelly has been very lucky to have been paired with a terrific artist who created wonderful cover art.

I thought "what better gift for Kelly than to give him a larger version of his cover art?" Something he could hang on his wall. And so the idea was born. I immediately contacted a bunch of our other friends, to get them in on the plan.

The first book will always be close to Kelly's heart, so we picked that one. The art piece had to be special, not just a larger-scale reproduction of excellent cover art. There could only be one way to do this: it had to be a velvet painting. With the assistance of Bill Robison, I commissioned a velvet painting for Kelly.

We presented Kelly with that painting last night: 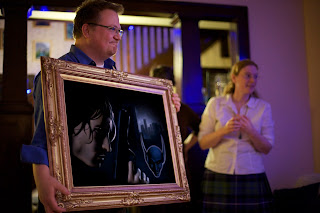 The reaction was priceless, all we hoped for: 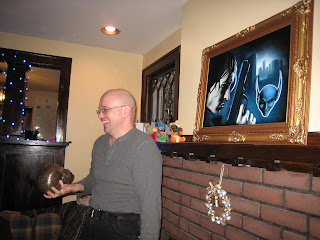 I'd like to thank my fellow conspirators in the plan:


More pictures are available at Wyrdsmiths. Kelly lays at least part of the blame on John Scalzi, which is fair to do, as that is where I got the idea.

About 2 months ago, I posted a note asking for help with the FreeDOS web design. The stylesheet is okay, but could use some updating. Specifically, the orange bar at the top of the page was meant to harmonize with SourceForge's colors, back when their colors were silver and orange. But they changed their colors to blue now, so the an orange bar makes no sense.

I figured, if I was going to update the FreeDOS web design to match the colors, it would be time to tackle a few other things that need improving. But I'm just not a web designer. So I put out a call for web designers to help us.

I didn't get much in response. In fact, only 2 people sent back a design concept.

One user (who didn't provide a name) sent me only an image of his idea for our new look: 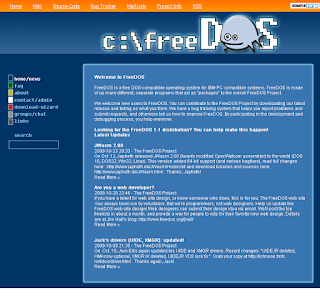 Another user (Bonnie) suggested a background image for the site, but did not provide a full design. It would have looked like this:

Unfortunately, neither provided a stylesheet, and I haven't been able to get back in touch with them since then.

Instead, I contacted AJ at nodethirtythree design. He agreed to help me, and modified one of his existing web designs ("nonzero_blue") for use on the FreeDOS web site. I think it looks great! I'll put the new design up in a few days.

I wanted to share this with you: my friend Joel Watson of Hijinks Ensue is trying to make the webcomic his full-time job. As part of this experiment, he sold "artist editions" of his first book (a collection of all his comics from 2007-2008.) If you buy the premium "artist edition", Joel will draw a sketch for you in the book (thus, ruining it.) :-)

I figured the "artist edition" was a great way to support a webcomic I enjoy. I asked for a version of Blinky, drawn in the style of "Joel" from the comic, including the beard and hair. I think it looks great: 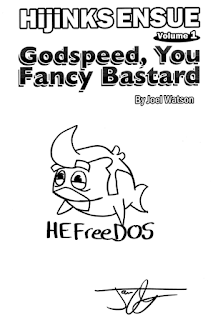 Let me zoom in and add some color: 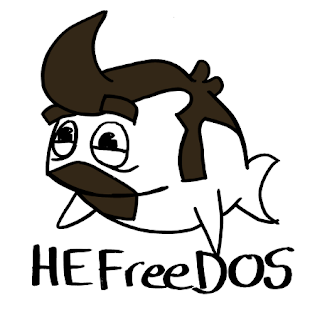 This is awesome. Thanks, Joel!

The New Year brings an opportunity for change. So to celebrate the end of 2009, and the beginning of 2010, I have posted the new web design for the FreeDOS web site. Thanks to nodethirtythree for this great update!

Note that if you are using a mobile device, you will [automatically] get a slightly different version of the new web design, optimized for mobile web browsers with limited resolution.