In the early 1990s, I was an undergraduate physics student at the University of Wisconsin-River Falls. A major component of our physics program was the physics lab. Every semester of the two-year General Physics track included a lab. And later in the program, physics students participated in Physics Lab 301 and 302, also known as "Junior Lab" because most of us took that in our Junior year. Depending on your program focus, you might take other physics labs.

As you can imagine, a large part of my physics degree was involved in a lab. I constantly analyzed lab data. So it shouldn't be very surprising to learn that I depended on a quality spreadsheet program.

In the late 1980s and early 1990s, the most common spreadsheet program for MS-DOS was the Lotus 1-2-3 spreadsheet. I remember my dad installed a copy of Lotus 1-2-3 on our home, but that was really the "take home" license from his office. Lotus 1-2-3 was excellent software, but it was far too expensive for me. I soon discovered the As-Easy-As spreadsheet, a shareware program that provided basically the same functionality and features of Lotus 1-2-3, but at a fraction of the cost.

"Shareware" was still something of a new idea in the early 1990s. The basic idea was that you could install the software and try it out. If you liked it, you registered the program by sending the author a check. Most shareware registration fees were pretty low, usually $20 to $30, depending on the program. And the shareware model encouraged you to share the program with friends, such as by passing around the install program on a floppy disk. Hence the name "shareware."

I don't know how many times I used As-Easy-As to help analyze my lab data, but I know it was a lot. I especially appreciated the linear regression function in As-Easy-As, which fit the best line to a linear data set, including standard deviations of the slope and intercept. These "error analysis" values were a required element of our physics labs. While I could run linear data analysis via a FORTRAN program on our campus VAX system, it was much more convenient to run the analysis using As-Easy-As on my home computer, without leaving my dorm or apartment, and without having to dial into the often-busy modem pool.

As-Easy-As was my favorite DOS program of the era, no question. And I still have a great fondness for As-Easy-As, many years later. Whenever I install FreeDOS somewhere, I usually install As-Easy-As, as well.

If you're new to FreeDOS and wonder, "What can I do with FreeDOS?" then I encourage you to try As-Easy-As. While the original version of As-Easy-As was shareware, TRIUS Software has since posted the original install files and activation code for As-Easy-As 5.7, including the full user manual, for free. Thanks, TRIUS! (This isn't "Free software" or even "open source software," but a "closed source" program that is now available at no cost.)

Installation is simple; just unzip the package and run the installer. When you've done that, find your way to the As-Easy-As directory (by default, that's C:\ASEASY) and run the ASEASY.EXE program.

As-Easy-As includes several sample spreadsheets that demo the functionality of the program. You can calculate a mortgage, manage a checkbook, generate probabilities based on different functions (Poisson, Gaussian), convert units, and a host of other functions.

If you are familiar with modern spreadsheet programs like LibreOffice Calc or Microsoft Excel, you will notice a few differences in As-Easy-As. That's because As-Easy-As tried to be as much like Lotus 1-2-3 as possible. Microsoft, and later LibreOffice, tried to simplify the spreadsheet and introduced some new standards. You'll notice this in how you enter data into the spreadsheet. There are three basic ways to enter data:

Spreadsheets were built for numbers. That's their specialty. So As-Easy-As (as most other spreadsheets) make it really easy to enter numbers. Just type a number.

In Excel and other modern spreadsheets, you can just type in a string, like the label for a column. As long as the string doesn't look like a number, then Excel saves that data as a string. As-Easy-As sort of works the same way. If you enter an x in a spreadsheet cell, As-Easy-As saves that as an x string. But it's safer to enter strings by starting them with a single quote. So instead of typing x, you type 'x.

Or as you'll see below, you can also start a calculation with @.

Functions in As-Easy-As are set off with an @ character. So the SUM function is actually referenced as @SUM and the AVG function is @AVG.

In As-Easy-As, you can get a list of all the spreadsheet functions, and how to use them, in the online help. Just press the F1 key as see the list of @ functions.

Let me show you a simple example:

As an undergraduate physics student, I often used As-Easy-As to perform linear regression. As a quick example, I created a simple table of x,y data that described a line (y=x). Because a line that is exactly y=x isn't very interesting, I added some randomness to it using the @RAND function. The random number function generates a random value between zero and one, and I chose to "center" the randomness around the y=x line. So for each x, the corresponding y value was x+@RAND-0.5.

In the spreadsheet, you can reference another cell using a cell reference. So the value A2 references whatever value is stored in column A, row 2. Once you enter the calculation +A2+@RAND-0.5 into the B2 cell, you can copy the cell to other cells in the same column, and As-Easy-As will propagate the cell references. So the B3 cell bases its calculations from the A3 cell, and so on.

I mentioned that As-Easy-As includes a useful linear regression analysis. You tell As-Easy-As where to find the data, and where to prints its results. As you can see below, As-Easy-As fit a straight line of slope 1.022 ± 0.035 and intercept -0.065 ± 0.318 to my randomized linear data. 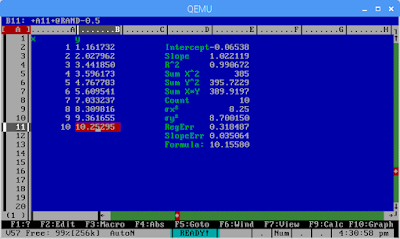 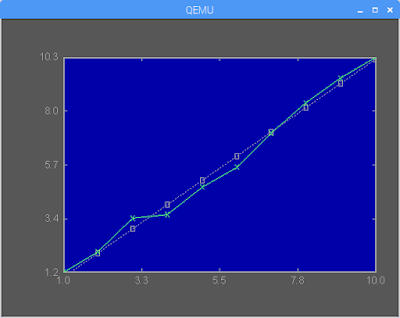 What if you wanted to project a trend of current data? For example, I track how many times people download the FreeDOS 1.2 distribution from our website. It's pretty constant, so I entered the download counts for the month of February 2018 into As-Easy-As, and generated a simple trend starting from the middle of the month.

Since downloads are pretty constant, I made the simple assumption to use the @AVG function on the previous data. That is, the next day's downloads should be pretty close to the average of the days before it. In As-Easy-As, I needed to enter the @AVG function to reference a range of cells.

Referencing a range in Excel or other modern spreadsheets uses the : separator. For example, to reference the five values in column A, rows 2 to 6, you enter A2:A6. But in As-Easy-As, you use the .. separator. You reference the same range using A2..A6.

That's all that's required to generate a simple trend of our download data in February. Since I already had the complete data, I also generated a simple calculation of the difference of the trend prediction versus the actual value. 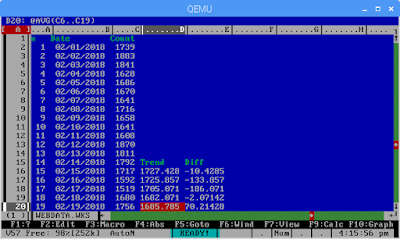 And the chart from this data:
(This time, I remembered to set the interval ranges.) 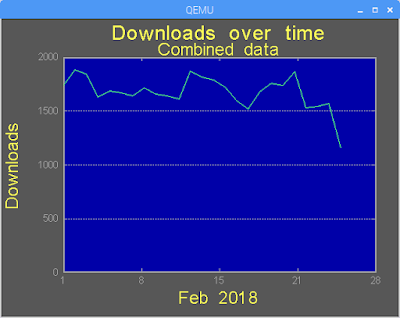 How to run FreeDOS on Raspberry Pi, part 2

I expanded my other item about How to run FreeDOS on Raspberry Pi, and turned it into an article for OpenSource. Here's a recap from that:

As the founder and project coordinator of the FreeDOS Project, I'm often the go-to person when users ask questions. And one question I seem to get a lot lately is "Can you run FreeDOS on the Raspberry Pi?"

The short answer is "no" because like any DOS, FreeDOS needs an Intel CPU and PC BIOS. The Raspberry Pi doesn't have either of these. The Raspberry Pi is based on an ARM CPU, which is a completely different architecture.

But you can run FreeDOS on the Raspberry Pi if you use a PC emulator, like QEMU. FreeDOS runs fine in QEMU on Raspberry Pi, including games, but be aware that installing FreeDOS will take a long time. Actually, anything that requires a lot of disk I/O (like installing software) will be slow because the microSD storage on a Raspberry Pi isn't exactly fast.

Once you have installed FreeDOS in QEMU on the Raspberry Pi, you shouldn't notice any performance issues. For example, games usually load maps, sprites, sounds, and other data when you start each level. While starting a new level in a game might take a while, I didn't notice any performance lag while playing DOS games in FreeDOS on the Raspberry Pi.

In the 1980s, my preferred word processor was WordPerfect. It was a great word processing system. WordPerfect was fast, powerful, and streamlined. I liked that WordPerfect "got out of the way" so it only displayed my text, plus a small status bar at the bottom of the screen.

I used WordPerfect throughout the 1980s, but moved on to a different DOS word processor soon after 1990.

I haven't run WordPerfect 5.1 for DOS in a long time. Sure enough, it installs and runs great on FreeDOS! I tested WordPerfect on FreeDOS 1.2, running in a QEMU virtual machine. 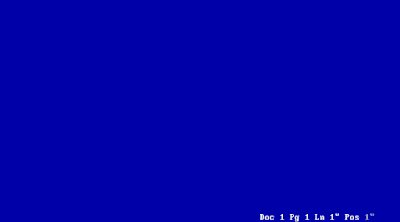 But WordPerfect could be very challenging to use. WordPerfect used the function keys to access the different features, like turning bold text on or off, or centering a block of text, or saving your work. Each function key F1 to F12 could be modified using Alt, Ctrl, or Shift, with a possible set of 12 × 4 = 48 different key combinations. But in practice, not all of the function combinations were used.

In my test, I wrote a simple document that demonstrated centered text, and simple formatting. 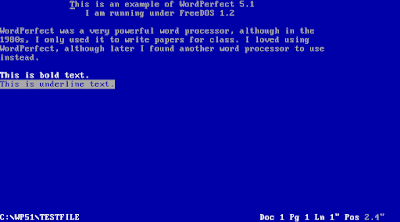 A powerful feature of WordPerfect was Reveal Codes, which allowed you to see how the word processor translated your document. Have you ever messed up a document in LibreOffice or Microsoft Word, adding some random formatting, and you wish you could go in and remove the one weird formatting code? With Reveal Codes, you could do that. 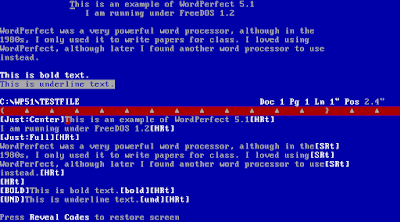 As an experiment, I loaded my test file into LibreOffice, and it imported correctly. Granted, this wasn't a very complex document, but it was interesting to see that LibreOffice could read WordPerfect files.

If you're interested in learning about the history of WordPerfect, you may also want to read Almost Perfect by Pete Peterson. You can buy it on Amazon, or download the free ebook version from the author's website.